It is produce season! Meaning locally, we can grow and harvest a wide aray of vegetables and fruits that are not always available other times of the year. This also means better taste and quality, as produce will be left to ripen longer and don’t have to travel as far before being consumed.

So here begs a question many ask… when choosing produce, how much does organic matter?

Overall, buying organic does not ensure higher nutrient content, necessarily. Nutrient content is based on quality of the soil and distance traveled of the crop. It does, however, ensure no, or significantly less, pesticide residue exposure. Artificially made pesticides, those shown to have the largest threat to human health, are not allowed to be used on organic produce.

Pesticides are used on produce during growth and after harvest to protect the crops from insects, weeds, other environmental conditions that may damage them or spoil them, as well as keep them looking fresh for transport.

If you are purchasing your produce from a local farmers market, chances are the farm is small and their agricultural practices are much more “organic”, even if not labeled so, than conventional produce at the store. And if you are questioning this, you have the opportunity to ask the farmer about the growth of their crops directly, so you will know what goes on and in them.

The Environmental Working Group (EWG) puts out a yearly Shopper’s Guide to Pesticides in Produce. This guide lists the top twelve fruits and vegetables that have been tested highest for pesticide residues in conventionally grown produce, called the dirty dozen.

According to the EWG “Some 65 percent of thousands of produce samples analyzed by the U.S. Department of Agriculture test positive for pesticide residues”.

The risks of pesticide residue intake include cancer, cognitive and behavior disturbances, among other studied consequences.

It is the suggestion of the EWG, and a wise choice if you eat a lot of conventionally grown produce, to purchase those from the dirty dozen list organic as much as possible, to avoid these potentially harmful residues from being a regular part of your diet. It is also always wise to scrub conventional produce to be rid of any residue that may be present. 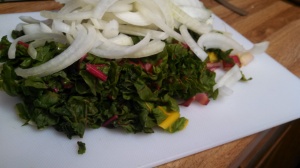 Now get out there an enjoy some fresh produce!

1 thought on “Fresh Produce: Organic or Not?”